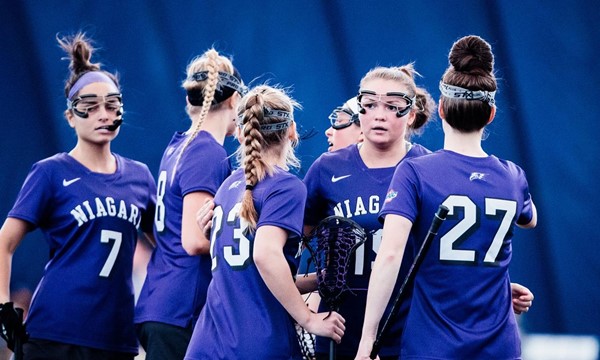 NIAGARA UNIVERSITY, N.Y – Niagara University was founded in 1856, Canisius College was formed in 1870, separated by a short 22-mile drive there is a natural rivalry that formed. The first record of the two schools facing off in an athletic event wasn’t until 1904 when the two schools faced off in basketball. Fast forward to 2018 and the two schools are still competing.

During the 2006-2007 athletic season the two schools decided to add some more fuel to the fire by creating an all-sport competition and they called it the “Battle of the Bridge” referring to the Grand Island Bridge which each school needs to cross to get to the other campus. The winner of the “Battle of the Bridge” receives the Canal Cup. Niagara claimed the Canal Cup in the inaugural year and then again in 2009-2010, but since then it has been all Canisius. However, in the latest Niagara-Canisius matchup the Purple Eagles took back-to-back games from the Golden Griffins on the ice.

The next big matchup between the two schools is happening January 30th at Gallagher Center as the Men’s Basketball team’s faceoff. When asked about the matchup Niagara Head Coach Chris Casey emphasized the importance of keeping a level head.

“We don’t prepare any differently,” Casey said. “We place the same importance on each game and prepare for each game the same way. The players know the history and rivalry of the game, I don’t remind them of that”. This will be huge game for the Purple Eagles to try and make a comeback in the 18-19 competition as Niagara is currently down 9-3.

Women’s Volleyball coach Donna Day had a little different take on the rivalry.

“I think the so-called ‘rivalry’ has taken on a different vibe recently,” Day said. “We have a lot of respect for them and what they’re building over there, and I know they feel the same about us. So, I don’t think it’s a rivalry in the traditional sense. Of course, we want to work hard and prepare as best we can leading up to the match but that is no different than any of our other opponents”.

Women’s Lacrosse Head Coach Wendy Stone took a ‘grand-scheme’ approach when talking about the Battle of the Bridge.

“We talk about the game when we get to it in the schedule but not before that, we discuss the added excitement/nerves etc. that comes with playing a rival.” Stone said.

Niagara and Canisius will continue to play each other for a long time hopefully the rivalry starts to pick up and the two schools start to both become more competitive. Seeing highlights of the stands packed to see these two schools face off is always a great sight to see. It would be great to see that again.