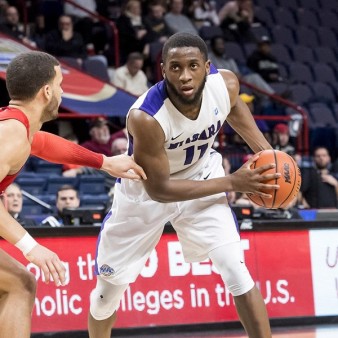 NIAGARA UNIVERSITY, N.Y.- There are certain sports you can feel coming as the seasons change. As fall sports teams are getting ready for postseason play, the leaves are falling, winter coats are coming out across campus and there is buzz around the Gallagher Center. Its that time of year everyone, basketball is back at Niagara.

Niagara Men’s basketball is coming off of their best season since 2012. The Purple Eagles went 19-14 with a 13-5 confrence record led by the likes of Matt Scott and Kahlil Dukes. However this was not enough to take the Purple Eagles deep in the MAAC tournament as they lost to Fairfield in the first round. When asked about the team’s previous success, Head Coach Chris Casey talked about the long term benefits.

“I think the biggest thing we were able to do was have carry over,” Casey said. “It’s important to develop guys. In order to develop them you need them for sometime and we had that with guys like Matt Scott, Kahlil Dukes and guys that will be returning like Marvin Prochet.”

With Dukes and Scott now both playing professionally overseas, there is big shoes to fill on the men’s team. Returning players like Dominic Robb, Marvin Prochet and Chris Barton are the marquie players coming into this season. Coach Casey talked about Robb, Prochet, Barton, and more.

“You look at guys like Marvin Prochet, who didnt get enough (MAAC) votes, he will use that as jet fuel and I expect him to be an all league player this year,” Casey said. “Our front court guys with Dom Robb and Greg King gave us great minutes and other guys like Chris Barton have been a main stay for us for some years. Then you add in guys like James Towns, who had some big games for us off the bench last year. So really were leaning on those guys heavily aswell as some good young talent we have coming in this year.”

All in all, it sounds like it should be another exciting season for Purple Eagles fans who have plenty to be optomistic about when the men’s team steps on the court. Their first regular season game is on Nov. 12 when Big 4 rival St. Bonaventure comes to the Gallagher Center to play the Purple Eagles at 7 P.M.

The Women’s Basketball team is coming off of a rough season in which they went 13-18 but still managed to post a 9-9 confrence record. After a second round exit of the MAAC tournament, it was back to the drawing board for the Purple Eagles. However, there is good reason to be excited for the women’s team. The team has a group of young talent that showed promise from a year ago. Junior guard Jai Moore was named to the third team All-MAAC Preseason poll.

Like last years team, there is only two seniors on this year’s team. This leaves younger players like Moore to take a heavier roll come the opening tip-off. Returning seniors Kharysma Bryant and Adila Gathers bring the experience to this team as they go into their fourth year playing for NU. Anticipation is growing around this team as we wait for the first action of the season. Just like the men’s team,  the women’s team plays it’s first regular season game at home vs. St. Bonaventure. Their game is on Nov. 6 at 7 P.M.

Players and coaches from the women’s basketball team were unavailable for comment.