Student panelists and other guests discuss diversity and acceptance on campus.

NIAGARA UNIVERSITY-A student led panel titled “Diversity in Action: A Discussion of Student Activism at Niagara University” was held in Dunleavy Hall on Feb. 16. The panel featured William Bradberry, a founding member and original president of NU’s Black Student Union in 1969, as well as student leaders from the current Black Student Union, Feminism Today, Muslim Student Alliance, and NU Alliance. The panel was held to discuss diversity and how students can be active and aware on campus in regards to social justice. 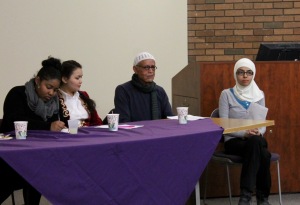 The panel opened with an introduction from moderator Dr. Carrie Teresa, a professor in the Communication Studies department. She introduced the discussion as a sequel to last semester’s presidential election discussion series, which was highly successful. This spring’s discussion theme is civic engagement.

“The overriding goal of these events is to provide a forum for students, faculty, and influential voices from outside of our campus to discuss challenges facing our community, our nation, and our world,” Teresa said.

Madison Boehler, president of Feminism Today, spoke about how the club is a newer organization, forming in fall of 2015. The club’s main goal is to discuss what feminism is and it’s relation to the campus.

Miranda Kraft, president of NU Alliance, and Aiden Beyer, vice president, spoke about their experiences with the club and how it is primarily a safe space for LGBTQ+ and allies. Byer spoke about his experiences as a transgender male as well, explaining why this safe space is invaluable.

“Sometimes, I hold my bladder all day because I’m not sure if it is safe enough to use the public restroom,” Beyer said.

Malika-Budur Kalila, PR coordinator for the Muslim Student Alliance, told the audience her story as the first Kazakhstan student to transfer to NU. Studying in Turkey for 3 years and serving as the president at the International Club there, her guiding light was NU after her school was shut down due to political unrest. However, she learned a lot from the upheaval.

During her time at Niagara, she was drawn to the Muslim Student Alliance as an outlet where she could express herself and her culture that is taken a lot differently on US soil, as she has been a practicing Muslim for 10 years. She felt that she always had to say who she is not because of her religion: not a terrorist, not a murder, not a villain. Kalila has hope that Niagara will become a place where this does not occur.

“For me, the power of the United States is democracy,” Kalila said. “And I want the power of Niagara to be acceptance.”

Following Kalila’s strong introduction was William Bradberry. He was very pleased to see that his actions as a student activist at NU in 1969 paved the way for the amount of diverse organizations on campus.

“Sitting here and looking out at the students looking at the panel, I’m seeing in a sense the fulfillment sort of a dream, but I never want to think that reality should be relegated to dreams,” said Bradberry. “We can make things happen. I can prove that. We are here.”

Bradberry also spoke about his experience on campus during the Vietnam War. He was part of the protest against the war that started at NU and made its way to Niagara Falls City Hall, accumulating more than 400 people. He said people joined in for their own causes, not just protesting the war. For lower wages, for equal school funding, for anything they believed was unjust, they joined Bradberry and the rest of the NU protesters. Bradberry said he learned something valuable that day.

“The alliance of causes that developed out of that simple expression helped us to build the kind of strength that we needed in order to get attention to serious issues,” said Bradberry.

Bringing his talk back to the current situation on campus, Bradberry said that the biggest problem NU students face in terms of diversity is getting along with each other. He put an emphasis on learning as different cultures from the vast array of students in order to spread acceptance, creating a united campus.

“I am very hopeful that Niagara University, Western New York, and Niagara Falls in particular will help lead the rest of the world to the right way,” Bradberry said.